When I first heard the term "paper piecing", I wondered about the logistics of embedding paper in a quilting project. Then I discovered that the paper is removed before completion.

At least half of my sewing journey is for learning, right?

Last summer, I saw an elaborate sewing project that was being described as dimensional paper piecing. A company called Indygo Junction and a designer named Amy Barickman are behind a new stabilizer called Fabriflair that is used to created 3D objects out of fabric covered pieces. Only in this case — unlike with paper — the stabilizer is not removed from the final product.

In fact, it's what makes the finished item a 3D work of art.

Although my interest was piqued from the start, I wanted to try my own hand at it (that is, without buying a kit) using supplies I already had and techniques that I preferred. For this project, the old tried and true single sided fusible Peltex from Pellon was my choice for the stabilizer.

As for the sewing, I wanted to be able to do as much by machine as I could. This means that making a really elaborate item composed of dozens of small pieces that need to be hand sewn (like the one I originally saw) is likely not in my future. Oh well.


This is a six sided, symmetrical, double ended hanging ornament, made out of twelve isosceles triangles. It's hard to measure, but the approximate dimensions are 9" (~23cm) wide (at widest point in the middle) and about 11" (28cm) tall.

[affiliate link]
If you're like me and want to maximize your time sewing at the machine and not so much with your fingers, then this project is for you. The sewing takes less time than the cutting and fusing.

To make this ornament, you'll need:

The size of the fabric triangles is totally up to you, but mine were 5.5" or 14cm wide at the base and 8.5" or 21.5cm high from middle of base to peak, as shown in the graphic below. 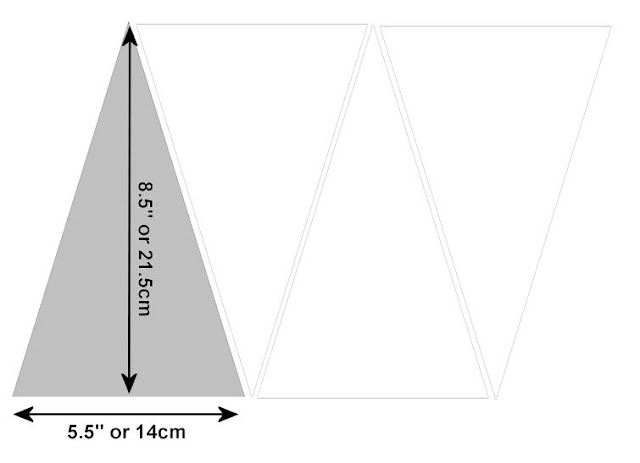 Whatever your fabric size, cut the Peltex triangles a 1/2" or 13mm smaller all the way around. (My template for the Peltex measured 4" or 10cm along the width of the base and just an eighth over 6" or 15.5cm from middle of base to peak.)

Use the fact that the two long sides of these triangles are the same length to your advantage, by cutting your fabric or Peltex pieces in a row — right side up, upside down alternating — as shown in the diagram above. I used three Robert Kaufman fabrics, cutting four triangles out of each.


When the cutting is done, wrap each fabric triangle around a Peltex triangle, fusible side up. Starting along one long edge, fuse the fabric onto the stabilizer. Keep going until all three sides are fused. (For the sake of your fingers, keep your iron on a high but dry setting and avoid touching the bare fusible part of the stabilizer.)


You'll wind up with "tails" of fabric at each corner, but don't worry about them.

Stitching at the Machine

Once all pieces have been fused, think about what order they will be used for your ornament and pin or clip them together in pairs (with right sides together) in preparation for sewing. (If you have to, mark the inside of each piece with a number to help you keep track of the order.)


Set your sewing machine to a zigzag stitch of 3mm wide to achieve the following...


I'm not sure what stitch length this is, since that part of the dial on my machine doesn't indicate an actual number; test it out on your particular machine until you get something similar.

Once you have it set to your satisfaction, run the zigzag stitch so that the one half of the zigzag falls off the surface of the fabric. When you open up the two joined triangles, you should see something like this.


It should look very neat and tidy... and you didn't have to hand sew it!

Take your finished pairs of triangles and sew them together until you have a completed assembly of six joined triangles.


Take your remaining triangles and place them in desired order around this assembly. Mark them if necessary and then clip into pairs and start sewing again.


When both halves are completed, place them right sides together and do the same zigzag stitching along the six-sided edge.


Carefully turn the whole thing right side out when you're done.


Now for the part that I usually don't like... finishing up by hand. However, it finished up quite quickly.

Tuck the little fabric tail ends into the centre of the ornament and ensure that the open panels can be closed tightly around them.


You will actually start sewing from the widest part in the middle and work your way out to the pointy ends.


If you don't want your stitching to show, you can do an "invisible" stitch. I figured that since the stitching can be seen along all of the edges anyway, hiding this one would be odd.


Finish up by threading some fishing line through the top, hang it up and admire your handiwork.

By the way, if you're into tassels, you could add one to the bottom. Or make two or three of these in different sizes and hang them "water drop style" one on top of the other. (Hint: you don't have to use six triangles per "side".)

Hope you enjoyed this little introduction to dimensional paper piecing! Another project (a vase) is in the works to be turned into a pattern. If you're interested in being a tester, take a look at the requirements on this page and then drop me a line.