Revisiting the MIY (Make it Yours) Bag

Two years ago today, I released the first pattern I ever wrote up and gave it away as a freebie.

It's been downloaded thousands of times since then and I often check on Craftsy to see if anyone has posted new photos of their completed projects. Knowing that most people who download free patterns are doing so simply to collect them, I feel fortunate that a few have actually shared the results of their crafting.

I have to admit that one of the bags was not at all recognizable to me as being based on this pattern, but perhaps in the spirit of the name behind this bag, that person really did "make it hers".

Let me preface by saying that I am not normally a fan of handmade bags done up in leather or vinyl. To me, something intangible is lost when self-made creations so closely resemble store bought items. Don't get me wrong. I salute the unmistakable talent and craftsmanship that goes into sewing a bag out of faux leather — and I'm not downplaying the accomplishment by any means — but in terms of my personal tastes, I find myself more drawn to bags and purses that are made out of more common fabrics.

When a bag is made out of fabric, it's just unique. Even if a thousand people use the same pattern to sew up a bag, odds are you'll get a thousand different looking bags if they use quilting cottons. It's much harder to differentiate a bag made out of mostly solid coloured leathers and vinyls.

[affiliate link]
All that aside, when this bag showed up on the reviews for the MIY Bag on both Craftsy and AllFreeSewing, I was mighty impressed.

This MIY is made out of a glamorous gold on white vinyl with cotton for the lining. The owner of this beautiful bag is named Carol (at least, that's how her AllFreeSewing profile identifies her) and these photos were uploaded by her. She self describes as a professional level seamstress and it definitely shows.


The large front pocket — accessible from both sides in this case — is essentially as big as the entire bag. That was the one feature that I really loved about my Sears inspiration bag, although for security, I like the pocket to have only one access point.


The expanse of storage space inside this pocket almost doubles the capacity of the bag.


For the interior, it looks as though she put in a standard zippered pocket as well as the card slots and slip pockets on the reverse side. She used some more of her vinyl scraps to make the two side seam sunglasses/whatever holders.


There are two options for finishing off the bottom of the bag, one with a gusset and one without. This one has the gusset and if you're prepared to take on a bit more tricky sewing, it's probably the better option.

Carol's final assessment? "It took me about five hours, has few pieces, hardly any hardware....I love it!"

[affiliate link]
Much of what she said was intentional on my part. This was the first pattern that I drafted up, based on a bag that was on its last legs and I liked it for many of the same reasons. It's intrinsically simple in construction (and by omitting the gusset, can be even more simple) and apart from zippers and a magnetic snap, you don't need to peel out big bucks to buy extra notions or hardware.

That said, if you're an experienced bag maker, you can see where you might add rings or buckles or whatever.

The pattern provides full size templates for the front/back panels for both plain and pleated styles, so there's no need for guesswork in that area. I encourage and provide many opportunities, however, for the crafter to consider and customize the result.

[By the way, if you're wondering about how to organize your stuff inside a bag like this, I refer you to my two favourite solutions: my Wave Purse Organizer and this nifty 5 pocket zippered pouch. Both have served me well.] 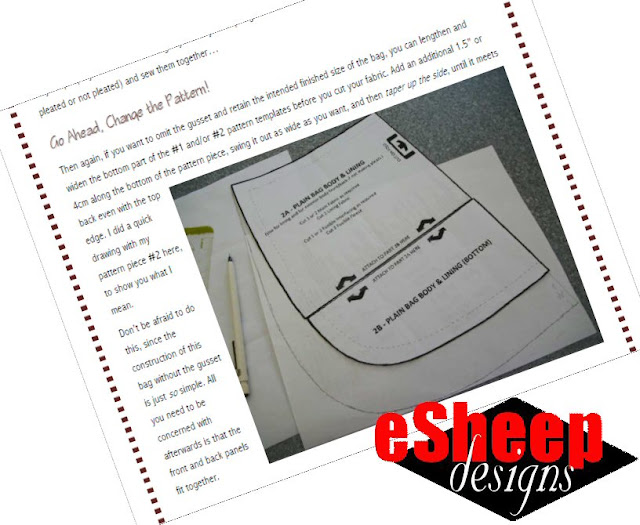 Think of this PDF as a class in being creative on the fly as you make a bag. If you're scared of doing your own thing and lose sleep over changing seam allowances, this won't be for you. But if you've been looking for a simple bag in which you can freely add features without a lot of headache, give this a try. I really hope to see more!

Want the download? It's available from my Craftsy shop here.

And Speaking of my Craftsy Shop...

You may already have heard, but in somewhat Grinch-y, Scrooge-y fashion — perhaps apropos for the season — Craftsy dropped a lump of coal into our collective stockings this past week. Those of us who are independent pattern designers received the following email on Wednesday.


While this move is not totally unexpected given what happened in the wake of their 2016 site makeover, it's still surprising. The way the email reads, it implies that designers and members requested this culling. I appreciate the fact that the "free for all" marketplace has become hard to police (for lack of a better word), but something tells me that we are likely inching towards the eventual elimination of all independent designer shops on Craftsy... or — more likely — conversion to a paid platform. (I sort of covered this topic last year.)

On the other hand, some of my patterns were definitely getting lost in the mix, so maybe this is good for the short term. Because my shop is mostly safe for now, as the second half of my email reads thusly:


There is still the ambiguity of what patterns may or may not be available in my shop by the end of the month — there are thirty right now — but there's not much I'm prepared to do about it without further information. I'm sure I'll have many months in 2019 to consider my options as we won't be able to upload any new patterns until whenever. (In the meantime, you may want to take a browse through the designer marketplace before some patterns are permanently deleted.)

But you know what? It's the time of year to think about what we appreciate and are grateful for in our lives, and I have to say that Craftsy has given me a lot over the past five years. It's been a good (free) run, and in the big picture — if changes are in the offing — I'm not sure I have grounds to complain.

So on that note, let me wish you all the best of the season! Have a great Christmas if that's what you celebrate; hopes for health and happiness to all regardless.

Email ThisBlogThis!Share to TwitterShare to FacebookShare to Pinterest
Labels: free pattern and sewing tutorial, Make it Yours Bag, my designs, pouches purses & bags