We are so near the finish line!

This week, I am pleased and proud to present to you the results from my pattern testers for the MyTie Makeover Mini Bag. (If you are visiting on the Saturday that this post originally goes live, I invite you to return later in the week for more results.)

As a brief bit of background, three months ago almost to the day, I posted about a couple of "purses made from a single tie" that I had admired. In the ensuing weeks, I planned, experimented and waited (mostly for ties to show up in my mailbox — the eBay experience was almost painful). A few weeks ago, I put out a call for interested crafters to test my pattern, as the second last step in the pattern making business.

I was inadvertently hobbled by Google's email sending my messages to spam for some strange reason. (I have owned the domain for over ten years and it's used sporadically for my consulting business; I have never spammed anyone with it.) I attempted to get back in touch with some people who had wanted to remain on a call back list for testing but had no luck. (And I'm assuming that they weren't just being rude by ignoring me.) Needless to say, I am happy to have had the pattern tested at all!

So without further ado, here they are...

Nekane of non dago titarea over in northeastern Spain contributed the following MyTie Makeover Mini Bags. She went way "above and beyond" by making all three MyTie versions!

Here is her version A:


Apparently she received her ties as donations from her workmates for this project... I can only say that the men over in Spain wear some pretty jazzy ties!


I like how she used cording to hold her chain strap... saves money on extra hardware! Next up is Nekane's lovely MyTie version B:


This was my favourite tie out of the three.


Impressed by how she took the time to topstitch the seams on the front and back panels. (That was suggested in my pattern, but I never did it.) And have you noticed her self-covered buttons?


See what I mean about the ties that the dudes are wearing in Spain??


A note about interfacing from Nekane's testing. She used a stiff interfacing for the version A bag (probably quite similar to the Decor Bond that I used) but then tried something more lightweight on the other two bags. In her opinion, the lighter stuff worked well for version B, but not so much for version C (which she says should probably be done with the stiffer interfacing).

By the way, she finished all of her bags with a satin lining, as you can see here in her version A bag:


English not being her first language, Nekane was at first hesitant to take on the testing task. We both figured that if she was successful, then it would be "all good", as the saying goes. In the end, her feedback was that "The instructions are very easy to follow, truly. I like your writing style."


Love the embellished fabric flower and button (she used a snap fastener underneath). I have seen the results of Daryl's creativity in her other projects and she did not disappoint here in making this MyTie her very own.


A very sunny choice of lining fabric (and she made pockets on both sides).


And finally...a look at the beautiful cording that she hand braided for the strap. She tells me that this is the Japanese art of Kumihimo. (And here I was wondering how she got matching fabric to make a strap!) 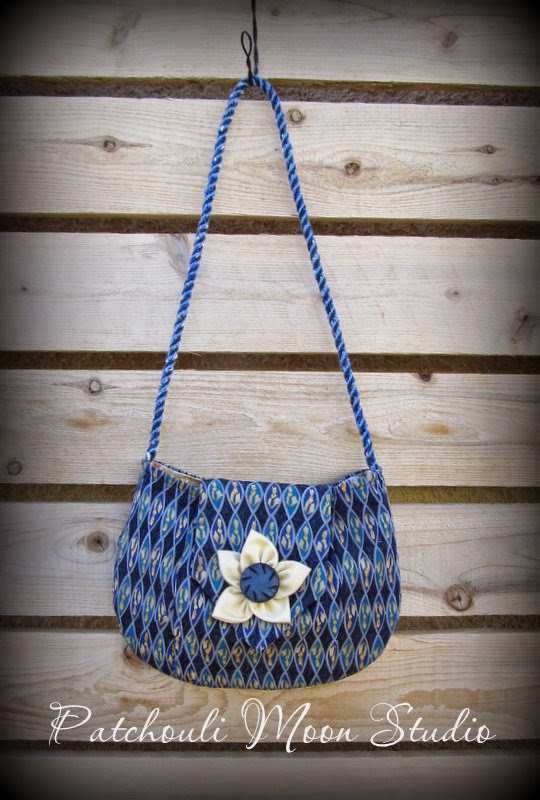 Some feedback from Daryl: "I like the idea of upcycling a necktie into something else and these bags are so cute and a great way to give new life to a necktie. The size of the bag is perfect for a young girl too. Elegant fabrics would make a great evening bag or great bag for a wedding, while a novelty tie print would make a cute bag for a young girl or teen."

Amy Walker shows off her years of sewing experience with this MyTie Makeover Mini Bag, version A. Hers is made from a navy blue geometric print tie (shopped from her husband's closet), finished with a pink lining.


Amy provided an interesting take on how to deal with potentially flimsy tie fabric: she traced her pattern pieces onto butcher paper and then ironed them directly onto the front of her fabric so that she could cut them out. Apparently it's an applique technique... interesting! (That's my "something new" that I learned today.)


Pink is always a nice contrast with navy, don't you think? (For those with an eagle eye who think Amy's bag looks just a little different, it's because she installed a gusset into her lining.) 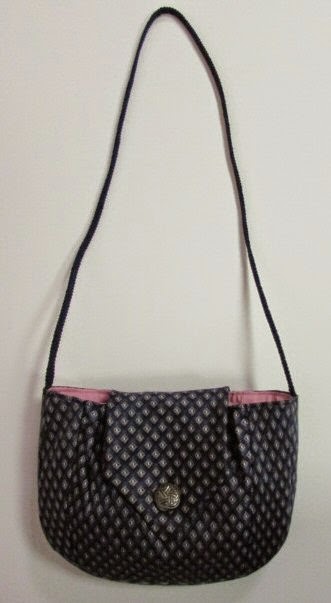 Some feedback from Amy: "This pattern is so cute! What a great way to spend a Sunday afternoon. Creating something pretty out of an old tie. Your tutorial was very thorough and I enjoyed your explanations and tips."

Naomi from down under (Australia) blogs at Made by Nomes. Here is her MyTie Makeover Mini Bag, version B.


As you can see, she actually managed to harvest enough fabric out of her elegantly striped tie to create a fabric strap. (I believe her tie was over 4" wide.)


The bag appears to be standing up well despite the fact that she said that she didn't interface it. (I'd be interested in what it would look like if it was carrying "stuff" inside...)


Feedback from Naomi included, "Pattern is very well written and the only thing I believe would be a valued alteration, would be a pic to show 'newbies' how to measure the width of the tie required....otherwise I'd say this pattern is suitable for all levels of sewist, although with most ties being 'slippery little suckers', I would perhaps grade it for an advanced beginner."

This next set of MyTies is courtesy of Erin McKinney, who added these renditions of versions B and C (at my request) to the pile:


I love the creativity of my testers in finding just the right strap!


Erin's version A MyTie was completed with a 100% cotton tie (I didn't even know they made ties out of cotton), so she didn't interface it with anything. With the benefit of hindsight, she thinks that a lightweight interfacing would have provided a bit more structure.

I would recommend that — if these purses are meant to be used (who knows, you might just want to hang them on your wall) — it would be helpful to interface them with something so that they are supported when filled with stuff.


For her version C MyTie , Erin encountered a totally different tie material. She says that this one "was completely slick, it didn't have any texture to it at all and it wanted to slide around on me no matter what I did"!

Another recommendation at this point: it may be worth it to source out the less expensive ties made out of polyester. If you have no choice, be aware that those made out of real silk (or even satin) will be more challenging to work with! But — like this one — it could turn into a very pretty purse.


Erin interfaced this one with Pellon Fusable Midweight. She says it's a bit stiff but it does provide body to the bag.

Again, I think that in actual use, if you interface the exterior material, you will appreciate that the bag keeps its shape and does not sag all over the place.


Some other comments from Erin: "I think the pattern is easy to understand, specially since there is such a variable in tie design. I noticed that even if two ties are the same size, once you open them up, they are drastically different. (The taper is different for every tie!) I'm amazed at the size of bag I can get from a tie! Both B and C bags are great, though my favorite is probably C. I'm not so great at curves and love box corners!"

A heartfelt thanks to all of my testers... I greatly appreciate the interest and the effort. There is something surreal about seeing a creation that you've designed come to life in the hands of another crafter. (Wanna see more? Check out this update post.)

Look for the MyTie Makeover Mini Bag pattern to be up for sale in my shop next week.