When I was reintroduced to sewing again a few years ago, it was with absolute surprise regarding what people were actually sewing... beyond clothing, that is.

Yet despite all that has come to my attention since I've been blogging about my sewing journey, this particular project still managed to "wow" me when I first saw it about a year ago.

First of all, let me give credit where credit is due. The foundation of this tutorial comes from Ang at Snowy Bliss (link at the end of this post), who first blogged about it in June of 2010. I found the project through AllFreeSewing and bookmarked the page, since I found the idea intriguing, but did not know whether or not I would ever attempt it.

You know, it was one of those sewing dilemmas of mine... ;-)

However, this past Easter, I determined that the artificial flowers that we had out at our vacation home was in permanent tatters and finally disposed of them.

See this picture? It actually doesn't show them as pathetic looking as they were. But that black dot that I've circled is actually the "thingie" that holds the flower petals together... i.e., it's not meant to be visible!

My initial plan was to drop by Dollarama and pick up a simple bouquet to replace them. As luck would have it, AllFreeSewing featured Ang's project in one of their newsletters around that time, making a new decision for me: I would make my own flowers!

[affiliate link]
Before I go any further, let me say for the record that I would not post a tutorial on this blog for anything that is not primarily a sewing project. These fabric flowers are finished with a hot glue gun (although they could be carefully hand-sewn by someone who doesn't hate hand sewing as much as I do), but the main reason I want to feature this project is for the fact that it is provides excellent practice for anyone wanting to perfect sewing along a curve.

Yes, if you've been wanting something a little more interesting than sewing in circles on paper, then this is the project for you. First of all, the exercise is going to be so totally forgiving that mistakes won't matter. Secondly, you'll end up with some gorgeous fabric roses instead of useless circles of thread on paper. However, the best part is — by the time you've made a dozen of these — you're probably going be quite good at sewing curves!

Here is what you'll need to make a dozen fabric roses:
I looked around the house, but could not find anything that would serve the purpose of the stems, so off I went to Dollarama. (Depending on where you live, I suppose an option would be to venture outside to hunt down some tree branches.) These bamboo plant stakes cost me a buck twenty-five.


It was the perfect amount, as once broken in half, there were twelve of them. (They are fairly easy to break if you score them around a joint.) And it's doubly nice that they end up being of varying lengths instead of all the same.

By the way, this is not so much a scrap busting project as a stash busting project (since a full width strip of fabric is required and scraps are rarely so perfect). But if you do have fabric remnants not quite full width, I don't see why you couldn't artfully piece them together. It would produce a funky looking flower, I'm sure.

With right side showing, take each strip of fabric and fold it in half across the full width, so that you are left with a long strip, 2.5" high. Snip the selvages off and press.

Download this template and use it to start tracing a scalloped edge along the open side of each strip. (Cut the initial 2 sections from the template and then fold the strip back onto itself to cut another section. Repeat this process with longer sections to finish the remainder of the cuts. Depending on the width of your fabric, you should get 15 to 16 curved sections.)


Finish one end of your strip of fabric with a straight section about 1" high, as circled in the following picture. Keep it no more than 4" long (and no less than 2.5").


Once you've got one strip cut, use it as a template to prep your remaining strips.

Dial the stitch length on your sewing machine to a long basting/gathering stitch and sew along the fold of each strip, but just along the scalloped section (i.e., not along the long part at one end; see photo below). Do not trim any of the thread ends as they are needed to gather up the material later.

At the long end, use a pin to pick out the bottom thread so that both threads are on top. (You will need to tie these two ends together later.)


For efficiency, you may want to lay down this gathering line of stitches on all twelve strips of fabric right now.

Refold each strip and pin the scalloped edges together.

Set your stitch length back to normal and get ready to do a whole bunch of curves!

It doesn't matter what end you start at, but try to maintain a 1/4" seam allowance as you sew around the entire open edge. At each "valley", put your needle down into the fabric, lift up the presser foot and pivot to start sewing up and down the next "hill".


Sewing along a curve is much like driving. Keep your eye on where you want to go and gently ease the fabric along with your hands. Don't fight it and don't go too fast. (And a shorter stitch length will serve you better than a long one.)

By the time you do a dozen of these, it'll be old hat to you.

The process of making these is really quite simple, but I made a change to how the center is done that ends up being even simpler, I think.

But before that, you need to gather up the bottom edge of your fabric strips. Working from both ends, carefully pull on one of the loose threads to gradually gather the material. Ease any bulkiness along with your fingers, rather than trying to yank the thread; i.e., you don't want it to break.


You want to end up with nice, even ruffles like these.


After you've "ruffled" all of your strips, tie the loose thread ends together to keep the tension. It's time to practice making a flower.

Start the center of the flower by pushing a stick into the straight end of the fabric strip, oriented as shown here.


Then start twisting the fabric to the left. (This is different from Ang's original tutorial where she has you knot the end around the stick and then start wrapping.) 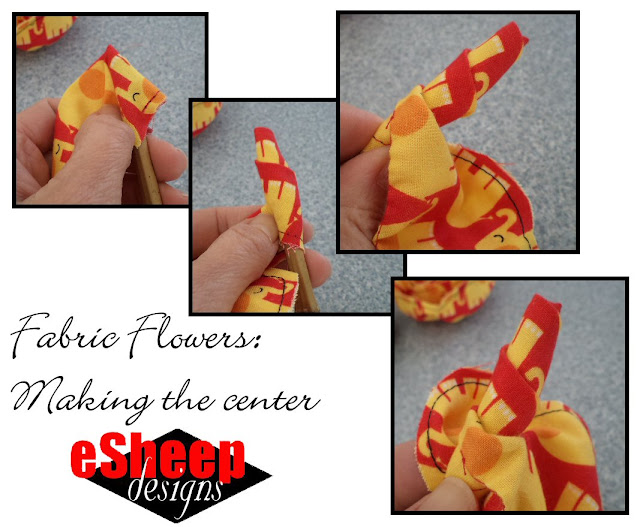 Eventually, the entire strip of fabric will be wound around and it will form a rose!


How tightly you wind the fabric will determine whether the rose is opened or closed. Taking the time to practice without the glue gun will allow you master the final look that you want to achieve. (Keep in mind that even though the bottom edge is already gathered, you still have the option to "nip and tuck" as you go around to create a wide open flower, which was what I wanted.)

When you're ready to start gluing, begin by inserting a glob into the end of the strip where the stick is. Then keep applying glue to the core as you wrap the remainder of the fabric around.


The best part of this project? There's really no right or wrong way of doing it... have fun and create something unique!

[affiliate link]
A feedback about this project on AllFreeSewing griped about the raw edges around the "petals" of these flowers. Pfft!

Personally, I think the raw edges add to the rustic charm. Doing it this way allows those with less than perfect curve-sewing skills to avoid frustration and achieve success. I also think that the unfinished edges add a natural ruffle effect to the edges of the flowers.


That said, if you're stuck on perfection, you can snip the entire strip of fabric in half at the fold, sew the scalloped edges together with right sides facing, clip the curves, then turn the strip right side out, poke out the petals, press well, topstitch, and then baste together the bottom edge for gathering. (Since the flowers will be smaller when made this way, you might also want to add some height to the strip of fabric.)

Oh, and I mustn't forget... please do take a look at the original tutorial from the Snowy Bliss blog here.

With Mother's Day coming in a couple of weeks, this project might be the perfect alternative to the "dead after three days" flowers that Mom might otherwise receive. (These received my mom's vote of approval, by the way.) And you can sharpen up your sewing skills in the process!

Stayed tuned also for part two of this project next week when I show you how I created some leaves for these flowers...